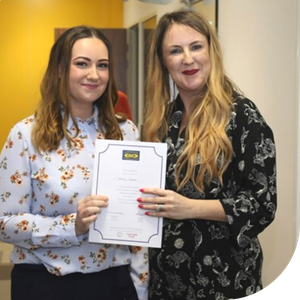 “Give a little, gain a lot, is something I feel describes my experience of volunteering. The small amount of time I give has made a massive difference to those I have supported.”

How University of South Wales (USW) Criminology and Criminal Justice graduate Kelly Fenton describes her experience of volunteering, and the benefits of giving something back.

Kelly, 25, has been involved in volunteering from a young age, and, as a teenager, undertook fundraising events for a charity close to her family’s heart. So, when beginning university, it was natural for her to seek out other opportunities.

During her first year at USW, Kelly began volunteering with Skills and Volunteering Cymru (SVC), choosing to help with its Young Carers Club (YCC).

YCC is project which organises trips for young carers, offering them an opportunity to switch off from the responsibility and pressures of being a young carer. It also offers the young carers opportunities to meet others who have shared experiences, and build rapport with the student-volunteers who are seen as positive role models.

Over the years the club has undertaken a variety of trips, including cinema, theatre, and bowling outings, dining out, visits to Bristol zoo, various theme parks, and the Go Ape experience.

Now a Masters student at Swansea University, Kelly has become Lead Volunteer on the project, which involves working closely with the SVC office staff, planning the different trips, preparing and delivering volunteer training, and liaising with the YCC families registered on the project.

And during lockdown, Kelly’s experience was even more vital.

“The pandemic made this project particularly difficult to manage, with restrictions making many trips impossible to organise,” Kelly said.

“Additionally, many of the young carers live with people who were shielding due to their health conditions, which meant the team needed to be even more vigilant.

“But this didn’t faze the YCC volunteer team. Instead, we adapted the sessions to digital delivery, including befriending sessions for the young carers who felt they would benefit from one-to-one support, and organised other sessions including an online Escape Room, a street dance class, and a film and takeaway night - all from the comfort of their own homes.

“It was such a success that the project won the Youth Led Grant Project Winner at the Cardiff Volunteering Awards in 2021.”

Kelly’s connection to SVC was strengthened further three years ago when she was appointed as one of the charity’s Trustees – a role which ensures the charity is undertaking work in line with its aims, has enough funding to pay staff, and monitors the charity’s development as it responds to the needs of the local community. The role also offers volunteers an opportunity to progress within the charity, to learn strong leadership skills, planning and organisation skills, and gain extra experience within the Third Sector.

“Becoming a charity trustee allowed me to see a vision of what the charity’s aims and goals were. It allowed me to have a voice, an opinion and an input in changes, removals and additions made to projects,” Kelly said.

As for volunteering, what advice does Kelly offer to those who are considering following in her footsteps and offering their time to SVC?

“SVC made volunteering as a student really easy, all aspects of volunteering were scheduled on evenings, weekends or in half terms. As well as this, the staff make every effort to schedule clubs around exam periods to be sure not to interfere with studies,” Kelly said.

SVC was established more than 50 years ago by student volunteers, whose aim was to provide help to disadvantaged groups. SVC remains a student-led charity which is delivering more than 30 volunteering projects, supporting beneficiaries aged five to 80. Its projects support environmental initiatives, people experiencing homelessness, isolated older people, and children and adults with disabilities.

If you are interested in finding out more about SVC’s opportunities, visit – Civic Engagement Scheme